Okay, so instead of just talking about the problem I thought I would look up some resources on how the average person can help our little bee brothers and sisters. Below is some information and a list of helpful links centered on living in partnership with the pollinators of our planet.

Provide Nesting Places for Bees: Honey bees like hollow trees. If you can leave these on your property for honey bees to build their colony in please do. Plus, this gives you another reason to avoid clearing out that wooded area at the back of your lawn. Just let it be natural and nature will appreciate it.

Plant Bee-Friendly Plants: Plant a variety of native plants that have different bloom times to keep the bees eating for months. Many "weeds" also provide much needed nourishment for bees. Avoid using weed killer in your lawn and let the red and white clover flourish a little while longer. The bees will thank you for it.

Avoid Pesticides: Organic gardening is just plain better for everyone. Nature needs natural methods to be as healthy as possible. Use natural materials whenever you can.

posted by Grian/Lee at 13:13 0 Comments Links to this post 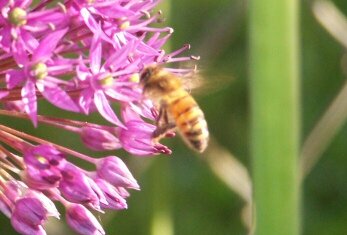 There's been a lot of blogging about bees lately.

Pagan Godspell was the first place I heard about the cell phone connection to it all. She leaves us with an earlier prayer for their survival as well. Hecate also chimes in to speak about her regrets and hopes for the future of humanity and the honey bee.

I've just sort of been soaking it all in and wondering what life on this planet might be like without the honey bee. We hardly notice them unless they're nearby and threatening to sting us or climb into our soda can. We don't tend to remember how our lives - the very food we eat - depends on their hard work.

Last weekend over dinner my father-in-law all but told me I was stupid for believing a cell phone could kill a bee. He's a Conservative you know, so apparently nature is less than important to him. If I even bring up environmental issues he goes off and calls Al Gore a "cardboard cutout of an idiot". What amazes me is that he loves to garden and seems to know all the names of the plants and trees around him. The picture of the bee and purple flower above is from his garden. I’m sure he thinks the honey bee is just the latest object of the Liberal media. Or something like that. I love the man, but he could certainly use a little wake up call when it comes to Mother Earth. 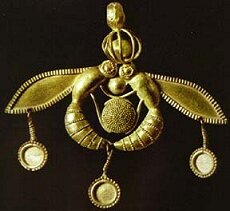 In ancient Crete the bee was venerated as a symbol of the Goddess. We don’t know the Bee Goddess’ name, but I tend to call her Merope, the Honey Faced. Merope was a later Greek Goddess and one of the Seven Sisters. She married a mortal and, as legend has it, that is the reason she is the faintest star among her sisters within the constellation of the Pleiades. She hides her face in shame. I think this was something the Greeks added later, after the influx of patriarchal ideas. The Goddess is often known to bring together – or balance out – the divine and the profane (profane being anything inherently human, mortal, and mundane.) Her mortal consort is very likely a later image of the bull-god of Crete.

So the Minoans were smart enough to understand the connection between all of life and to understand what it meant to live in harmony with the rest of the planet. They observed the work of the bees and noted how, without the buzz, their crops would fail and their lives would end.

Thousands of years later humanity has unfortunately become less intelligent and more concerned with how much "stuff" they have. "Screw those stupid bees, I just got the coolest, most expensive phone on the market! I can text at the speed of light and take hi-res pictures. That's so much cooler than a few bugs."

It's worth saying that the decline in honey bees could be a natural event. If that's the case I think Mama is trying to tell us something. She's all but shouting "your time is almost up."

posted by Grian/Lee at 08:45 0 Comments Links to this post

View my profile
View my art

The Not So FAQs

property of a lady

at the end of desire

the gods are bored